Twenty-two years ago, voices started talking inside six-year-old Carl’s mind, causing him to be taken to the Freedom Institute for observation by a megalomaniac doctor until the voices tell Carl it’s time to leave. He begins his trek across an unwelcoming land to find his mom, finding many perils along the way and answers he already knew.

September 2020 RRBC Book of the Month

The world had already begun to change, in ways Carl had no idea were possible, when the voices started speaking to him on the night of his sixth birthday. When Carl’s mom contacted Dr. Emerson Sharod at the Freedom Institute, she had no idea that the time she cherished with her son would end.

Twenty-two years later, the voices urge Carl to leave the Freedom Institute after a man is slain under suspicious circumstances. He doesn’t question them and naively crosses the threshold into the city of Montford, where he knows no one. A few help him, risking their safety so he can escape the walled city and begin his trek to find his mom in Saratin.

The world outside the walls is stranger than the city, with unknown dangers at every step, though not everyone is a foe. Along the way, he meets many who help him and shares stories about what caused the changes in the world. When he reaches Base 40, he comes face to face with Astrid, who rescued him from freaks on the first day of his travels. He is worried that she will tell the baser leader, Corporal Phelps, that he’s the escapee from the Freedom Institute, but she does not.

After an uncomfortable meal with Corporal Phelps, Carl shares his story with Astrid. She agrees to take him to Saratin. Reaching the tent city outside the walls of Saratin, they search for refuge, and Kenneth, who is partially responsible for the chaos in the world, takes them in. Corporal Phelps quickly infiltrates the safe place, and they return to Base 40, where Carl witnesses the Corporal torturing Astrid. In a moment of anguish, Carl remembers something he was told, helping him put together a plan to save Astrid and himself and, unknowingly, the world.

5 reviews for The Road to Saratin 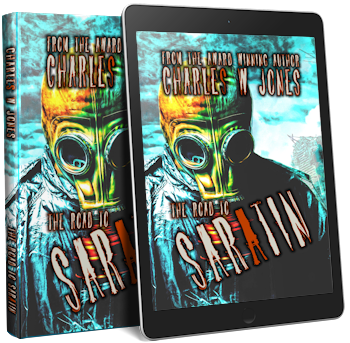