More than six years have passed, and unknown to Mary and Darrin, the Circus Tarot has rebuilt itself, tempting their young daughter, Susie, with the delights inside the cards. They return to World Circus to rescue Susie from its denizens to find she is content being a Clown with no desire to leave the enchanting land.

November 2018 RRBC Book of the Month

When their six-year-old daughter, Susie, announces she wants to go to the circus, World Circus’ uneasy memories fill Mary and Darrin. Mary would never admit that she still thought fondly of the charming place, while Darrin wants to forget it ever existed. Susie becomes obsessed with circuses, going as far as creating a makeshift tent in her bedroom.

Unknown to Mary and Darrin, World Circus knitted itself back together from scraps of paper and greeting cards stuffed into a box with the only remaining Circus Tarot card, Hanging Clown, which Darrin had kept as a memento. Ace of Buckets visits little Susie while she sleeps, giving her visions of the circus to entice her into the clutches of World Circus.

When Mary and Darrin return to World Circus to rescue Susie, they learn she is a Clown, but not just any Clown. She is the Page of Buckets, an imaginative, creative Clown with a flair for maiming and torturing her victims. Soon, Mary and Darrin are seduced by the impulsive world’s charms, drawing them tighter into its grip.

3 reviews for Page of Buckets 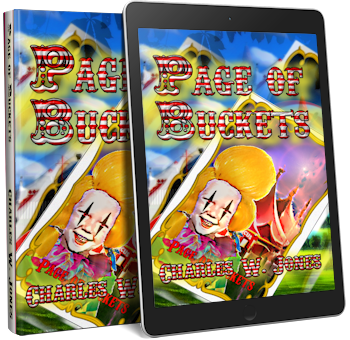